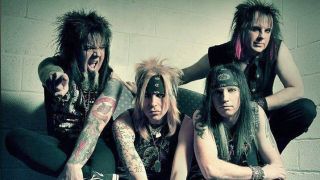 Tigertailz have split with singer Jules Millis for “personal reasons” midway through recording sessions for their upcoming album.

But the Welsh outfit have vowed to keep their plans on track.

They say in a statement: “We’ve had some amazing times and played some incredible shows, so we wish Jules all the very best for the future.

“We’re really sad to see him go – but we respect his decision. The band’s priority is always family, life and people’s wellbeing.”

They add: “We’re currently working on the record, Daggerz, and making great progress. So our plans will not change. We’ll complete it with a different singer.”

Millis, who spent three years with the band, says: “It’s been an honour to be in a band that I’ve loved since I was a teenager, so I look back on my time fondly.”

Tigertailz’s new vocalist will be announced in due course.