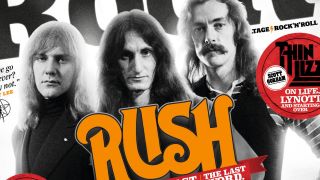 Faith No More “The biggest obstacle is that we had to learn how to trust one another.” FNM bury the past to come back with their first album in 18 years.

Scott Gorham The former Thin Lizzy and current Black Star Riders guitarist tells all about his relationship with Phil Lynott – and how golf saved his life.

Beth Hart The blues diva looks back on the demons and dark times that made her who she is today.

**The Darkness **They have a new drummer! Wait a minute, now they don’t! The rejuvenated Hawkins brothers on what went right, then wrong, and now right again.

Beck, Bogert, Appice How an argument over a ham and cheese sandwich caused the break-up of ‘the Cream of the 1970s’.

H.E.A.T On a mission to party like it’s 1989 and bring melodic rock back to the masses.

**My Morning Jacket **Ever wondered what’s the missing link between Metallica and The Muppets? Jim James’ purveyors of cosmic Americana have the answer…

Toto They’re the most rock’n’roll band – ever. Seriously!

Raw Power Both modern and vintage, have yerselves a jubilee with the silver-cabbed 2555X Marshall stack.

The Stories Behind The Songs Carl Perkins: It’s been covered by everyone from Black Sabbath to Bruce Springsteen. This is how Blue Suede Shoes became the original rock’n’roll anthem.

Q&A David Coverdale: The Whitesnake singer is spoiling for a fight with the ‘haters’ who have derided his latest album. And Classic Rock is first in the firing line…

Buyer’s Guide Paul Weller: From punk upstart with The Jam to the solo Modfather, this is the best of Woking’s favourite son.

Lives previews Gig previews from Black Stone Cherry, Kiss, 10cc, L7 and The Angels, plus full listings – who’s playing where and when.

Heavy Load Ronnie Wood: He once drank for England and calls himself “a great hang”, but never, ever accuse him of dying his hair.

If your newsagent isn’t selling issue 211 of Classic Rock, you can order it online.