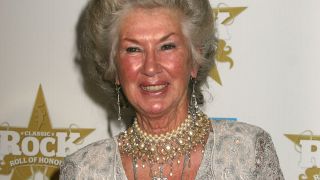 Philomena Lynott, the mother of Thin Lizzy great Phil Lynott has died at the age of 88.

Hot Press report that she had been battling cancer for a number of years, and had made the decision not to through chemotherapy.

She famously wrote the best-selling 1995 book My Boy detailing her early life with her son and his rise to fame as the frontman of Thin Lizzy, and was instrumental in the campaign to have the Phil Lynott statue erected in Dublin’s Harry Street.

The book was republished by Hot Press in 2011, and their editor Niall Stokes has paid tribute to Philomena.

He says: “She was a formidable and brilliant woman. I am really proud that we were able to participate in telling her remarkable story. Because she was indeed a remarkable person.

“She was hugely determined and courageous – and absolutely committed to the campaign to ensure that Philip’s memory was kept alive and his legacy celebrated.

“As a publisher, it was a joy to work with her. She was brilliant with fans and readers, proudly taking the time to sign books, in shops all over Ireland and listening to and corresponding with fans of Philip's. And what a story My Boy told!

“She grew up in a terribly conservative world, but she never allowed herself to be co-opted to the ordinary. She had a rebel heart, which expressed itself in all sorts of ways, and which hugely inspired Philip – and his music.

“He loved her deeply and dearly and she was immensely proud of him and of what he achieved.”

Stokes adds: “Her campaign to have the statue of Philip erected was a marvellous example of strength of character and conviction winning over bureaucratic inertia. She also had a great sense of humour.”

Philomena hit the headlines back in 2012 when she criticised presidential hopeful Mitt Romney for playing The Boys Are Back In Town at a Republican rally.

Speaking to Hot Press at the time, Philomena said: “As far as I am concerned, Mitt Romney’s opposition to gay marriage and to civil unions for gays makes him anti-gay – which is not something that Philip would have supported.

“He had some wonderful gay friends, as indeed I do, and they deserve equal treatment in every respect, whether in Ireland or the United States.”

Black Star Riders and Thin Lizzy member Ricky Warwick was one of the first people to pay tribute to Philomena.

He said: “So sorry to hear of the passing of Philomena Lynott. I had the pleasure of meeting the great woman on a couple of occasions. I was understandably very nervous, but her grace and kind words were lovely and inspirational. The unconditional love she had for her son was beautiful.”

Philomena attended the Classic Rock Roll Of Honour in 2006 to pick up the Tommy Vance Inspiration Award on behalf of her son.

So sorry to hear of the passing of Philomena Lynott. I had the pleasure of meeting the great woman on a couple of occasions I was understandably very nervous,but her grace and kind words were lovely and inspirational. The unconditional love she had for her son was beautiful.June 12, 2019