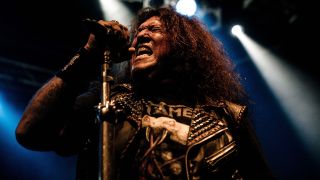 The thrash veterans are about to hit the road with Slayer across North America, with Billy saying the dates will mark the end of the run of shows in support of Brotherhood Of The Snake.

He tells Kimberley Bulletin: “This will be the final lap for us touring in support of our latest album Brotherhood Of The Snake.

“We want our focus, during this and after this, to dive back into the songwriting process. We want to release a new album in 2019, so we need to get started soon.”

Billy says that he and guitarist Eric Peterson are still the “main songwriting force” and adds: “Eric will crank out all these amazing riffs and I’ll write the lyrics.

“We fumble around until the main skeleton of the song comes together and then we’ll flesh it out until it’s complete. Guitarist Alex Skolnick, bassist Steve Di Giorgio and drummer Gene Hoglan, adding their talents? It’s crazy!”

Billy says they’ll wait until they’re off the road to “hone in on new songs” and pull ideas together because, “when you’re onstage under hot lights, blasting out high-intensity 100-minute sets, most nights of the week we’re just wiped.”

Those dates with Slayer will get under way on May 10 when they take to the stage at the San Diego Valley View Casino Centre. Click here for a full list of dates.