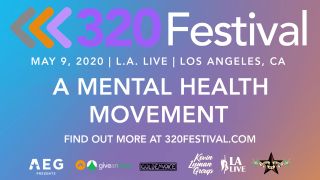 Chester Bennington's widow, Talinda, has announced that she will be holding a festival and mental health summit in LA later this year.

Talinda, who founded the 320 Changes Direction foundation in order to promote mental health awareness following her husband's death by suicide in 2017, has announced the 320 Festival – a "free community event" to be held on May 9 at L.A. LIVE.

The festival will also include a mental health summit that will involve panels and roundtables aimed to further the conversation around mental health, as well as a film festival which will showcase films looking closely at mental health and a ticketed gig later in the day.

The festival is being organised with help from Warped Tour founder Kevin Lyman, via his Unite the United Foundation. All of the profits will be donated to 320 Festival non-profit organisations.

Talinda says via a statement on her Instagram account: "Come join us for a day dedicated to normalizing mental health conversations and providing resources."

For more information, head to the 320 Festival site.

We are thrilled to announce the 320 Festival and welcome all to L.A. LIVE on May 9th! Come join us for a day dedicated to normalizing mental health conversations and providing resources. Find out more at the link in bio and become a part of the movement. Don't forget to tune in later tonight 7pm PT for the LIVE announcement of the Songs That Saved My Life Benefit show! Talinda Bennington-Friedman