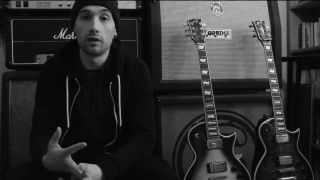 Hollowed-Out Planetoid will be released under the JMP banner and although a firm launch date has still to be decided, it’ll have a distinct “70s prog vibe.”

Middleton says: “I will be releasing a solo album that I’ve been working on for the past year real soon. It’s got a 70s prog vibe to it. No Kickstarter campaign but it was all self-funded and will be self-released.”

He’s decided to release the album on digital formats only – and while he reports not everyone will be happy with that choice, it comes down to the project’s independent roots.

He adds: “I just can’t afford to get CDs made as you have to get a minimum quantity done in bulk and I just don’t have the time to be processing them and posting them all out – and I don’t want to pay someone else to do that for me.

“I’m afraid that’s final – no comments are going to persuade me otherwise. I know it’s annoying for some people but there are t-shirts and prints if you want something physical.”