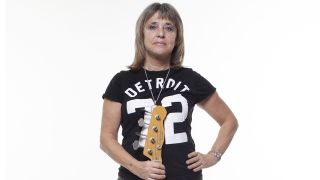 Details of Suzi Quatro’s new lyric book have been released after the pioneering Detroit-born musician recently hinted at the project.

In an interview with Cleveland.com last week, Quatro spoke about what she’s been up to during the lockdown, saying she had an illustrated book of lyrics at the publishers.

Now it’s been revealed its titled Through My Words – and it’ll be published on July 27 through New Haven Publishing.

The synopsis reads: “This full colour book takes a closer look at the lyrics to some of Quatro’s best-known songs and she writes about how they came to her, who she was working with and where they were when the lyrics were made.

“Together with private photographs, Suzi takes us through a journey of her life through her words.”

Quatro adds: “I turned 70 on June 3, 2020, and my bucket list looms large. Doing a lyric book was always on that list, so here it is. Through My Words is an illustrated informative diary of my life, told through the lyrics of my songs. Creation has always been my salvation.”

Through My Words is now available to pre-order – find further details below.

In the interview with Cleveland.com , Quatro said the film was “everything I wanted it to be,” and went on to reveal she’s demoed 14 new songs over the course of the last few months and is also planning a biopic.

Suzi Quatro: Through My Words
Suzi Quatro will release her new book titled Through My Words in late July. In the book, Quatro takes a look back over her life and career through her lyrics and comes after the release of the new documentary Suzi Q.View Deal