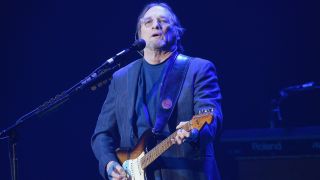 Stephen Stills says he was “flattered” when he found out that Jimi Hendrix wanted him to play bass with him.

The pair played together on Stills’ self-titled debut album in 1970, which was released a month before the guitar icon died. But he says he was asked to join Hendrix’s band full-time, but a hand injury prevented him from doing so.

Stills tells Classic Rock: “I didn’t realise they were really discussing it seriously until I read Mitch Mitchell’s book. I was quite flattered. But they did call me. I was in Hawaii with a broken hand, so I couldn’t go.”

And asked if he was tempted, the multi-instrumentalist says: “I’d have done it in a heartbeat, as long as it paid. But there were an awful lot of people that had an awful lot invested in Crosby, Stills & Nash.”

Stills, along with Kenny Wayne Shepherd and Barry Goldberg, released The Rides second album Pierced Arrow earlier this month. They recently wrapped up a run of shows in support of the record and will head back out on the road next month for a handful of performances.

The full interview with Stills appears in the latest edition of Classic Rock magazine, out now in print, digital and via TeamRock+.