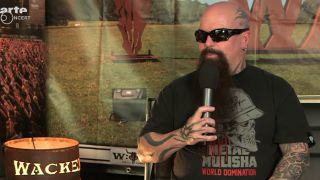 Kerry King has vowed the first Slayer album without Jeff Hanneman will be everything their fans would want – even though he knows many are expecting to be disappointed.

And King believes the response to standalone track Implode, launched earlier this year, should offer hope to doubtful followers.

He tells Arte Concert: “I know people are going to expect us to fail, because it’s the first record without Jeff. I get it. But I’m also very proud of what we’ve done so far towards new material.

“It’s fast and the slow stuff’s heavy. Everything people liked Slayer for in the past is on this record.”

He says of Implode: “I never go online and see what people are talking about, because people are ten foot tall behind a computer screen. But a lot was positive. A lot of people said, ‘For anybody that was worried about what Slayer was going to sound like post-Hanneman – don’t worry about it.’”

King last year stated that, while Holt would be invited to write solos for the band’s 12th album, he wouldn’t be writing songs. “Fans aren’t ready for it,” the co-founder said. “It would be like throwing somebody to the wolves.

“If there’s another record after this one and Gary’s still with us, that will be a time when I say, ‘Feel free to throw any riffs my way.’”