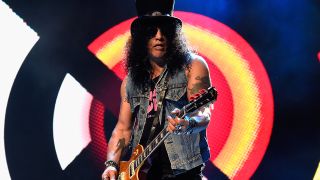 The guitarist was speaking with Sweetwater during GearFest 2020 when he was asked how he’s been dealing with life in quarantine.

Slash replies: “I've been back and forth between my studio in the house and doing a lot of writing and recording on my own.

Slash adds: “It’s a crazy, crazy time – definitely one for the books. But it’s been a good creative time, so that’s another one of the blessings – just sitting down and being patient and writing and not feeling rushed about it and not doing it so much on the fly, which I normally do.

“So it’s been a good creative period and something good will come out of it.”

Back in April, Susan Holmes McKagan, the wife of GNR bassist Duff, briefly touched on how the highly anticipated new Guns N’ Roses material was sounding, telling the Appetite For Distortion podcast: “Guns N’ Roses have been working fastidiously on some killer new stuff.

“I can't say much, but I've heard bits and bobs and it's pretty epic. I do want to spread good news, but not detailed news, I guess. Hopefully that’ll put a spring in your step!”

The band will also release a new children’s book based on their classic Appetite For Destruction track Sweet Child O’ Mine later this year. Published by Jimmy Patterson Publishing on September 1, Sweet Child O’ Mine will feature illustrations by Jennifer Zivoin.

Sweet Child O' Mine
Guns N' Roses have collaborated with illustrator Jennifer Zivoin for this new children's book based on the bands's Appetite For Destruction track.View Deal