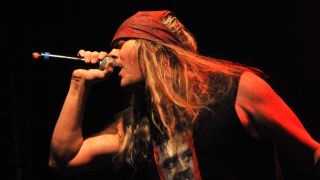 Skid Row vocalist Johnny Solinger has announced he will release a country EP later this month.

Titled Scrappy Smith, the recording is a tribute to the frontman’s grandfather, who Solinger reveals will hit a milestone birthday next year.

He tells Billboard: “My grandfather’s name is Willard Jesse ‘Scrappy’ Smith, and he turns 100 in April. He still drives down the mountain for coffee every day and he’s still kicking. He also goes to the recreational centre to flirt with all the 80 year old girls, so I decided out of love and respect to name the EP after him.”

The EP will be a digital-only release and will launch on October 28. Before its release, Solinger has made all six tracks available to stream through his official website.

Meanwhile, Skid Row are gearing up for a 10-date UK tour which starts in Bristol on October 17.