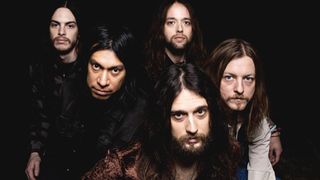 Scorpion Child say that while their music encapsulates the sound of the 70s, their latest offering is something of a departure.

He tells New Noise Magazine: “We love 70s music certainly, but we have less of a sacredness with it than we did eight years ago. We have found a way out of 70s purism.

“I like maintaining pieces of that decade throughout the music, as it was a great time for heavy riff creativity, but it fails to say everything we would like to say.

“It’s very important to us to keep the roots and seeds from certain trees we’ve planted in order to raise up an eclectic forest of majestic beauty elsewhere.”

He adds that while they didn’t set out for a change to their sound, having a band full of musicians with different musical influences was always going to have an impact of the outcome of the album.

Black continues: “We don’t consciously go for anything progressive, but we are a collective of bizarre individuals with an ever-evolving amassment of varied sounds.

“It’s who we are together, and we like it harsh, noisy, heavy, textural, and alluring.”

Scorpion Child will play this weekend’s Download festival, with a set on June 11.