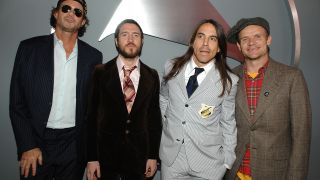 Red Hot Chili Peppers have announced that guitarist John Frusciante is back in the lineup, replacing Josh Klinghoffer who has been with the band for the last decade.

It’ll be Frusciante’s third stint with the Chili Peppers, with the musician initially brought into the group in 1988 to replace Hillel Slovak who died earlier that year.

The group say in a statement: “The Red Hot Chili Peppers announce that we are parting ways with our guitarist of the past 10 years Josh Klinghoffer.

“Josh is a beautiful musician who we respect and love. We are deeply grateful for our time with him, and the countless gifts he shared with us.

“We also announce, with great excitement and full hearts, that John Frusciante is rejoining our group.”

Frusciante played on the Chili Peppers’ breakthrough albums Mother’s Milk in 1989 and 1991’s Blood Sugar Sex Magik but was uncomfortable with being thrust into the spotlight due to the band’s ever-growing success and walked away.

He returned to the fold in 1999 for Californication and also played on By The Way and Stadium Arcadium, before departing again in 2009 to be replaced by Klinghoffer, who performed on the albums I’m With You and The Getaway.