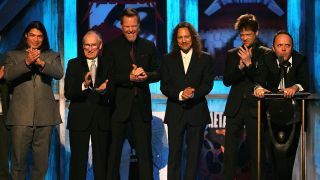 Ray Burton, the father of late Metallica bassist Cliff Burton, has died at the age of 94.

Metallica confirmed the news on their website, saying: “It is with incredible sorrow that we said farewell to Cliff’s dad Ray Burton last week.

“For 38 years, we were lucky enough to have the energy, wisdom and light of Ray in our lives. His eternal youth with his drive, positivity and relentless smile were both incredibly powerful and stirringly honest.

“From coast to coast and overseas too, Ray’s beaming face would regularly greet us, offering warmth and anchor to our travels, and when it came to the entire Metallica family, band, crew and fans, he viewed us all as his own.

“That he has passed away leaves an indefinable feeling of sadness and loss, but equally, we know Ray wouldn’t want us ‘moping around on our darn keisters’ for too long.

“So, in honour of him, and the kind of man he was, we also want to truly celebrate the 94 years of life Ray gave everyone, knowing in certainty that a glint of his light, wisdom and energy will always be with us all wherever we go. We love you Ray. Rest in peace.”

In August 2017, Ray revealed that he donated the royalties he received from his son’s work in Metallica to a music scholarship programme at Cliff’s old high school.

He told Alphabetallica: “From the royalties that I get, I give a scholarship to the high school he went to – the Castro Valley High School for music. So the kids that have won it thank me for it.

“I think Cliff probably would have done that with his money because he was not against education by any means. He liked it very much.”

Speaking in 2016 on the 30th anniversary of Cliff’s death, Ray said he was delighted to see Metallica thriving decades after his son’s passed away.

He said: “I admire James, Lars and Kirk for carrying on all of these years. They’ve stayed together and have done a very good job of entertaining. They have done an absolutely magnificent job.”