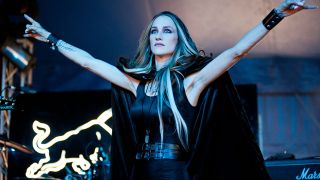 (Image credit: Will Ireland - via Getty)

It was confirmed last week that Janus had died by suicide at the age of 43, with her bandmates paying tribute to the singer saying that she would be “missed more than she could have ever known.”

Her partner and Huntress guitarist Blake Meahl also posted a message on Facebook to say he was devastated at the news – and now he’s confirmed that friends and fans are all welcome at the iconic Rainbow to celebrate Janus’ life later this week.

Meahl says: “Since Jill's departure, the amount of outreach and support from friends, fans and family has been absolutely incredible. It has been beyond heavy to see so many reminders of how she could be so talented and loved yet could feel so much pain and loneliness.

“Let's get together and celebrate her life and the importance that we still have each other. Expect a lot of whiskey and grown men crying.”

The event will get under way at 9pm at the venue, with fans asked to say: “We are here for Jill” at the door to gain entrance.