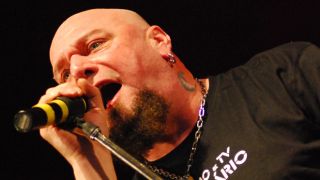 Former Iron Maiden singer Paul Di’Anno jokes his wife won't let him retire - because she couldn't stand having him around the house.

Last year he told fans he was “pulling the plug” on his career, but later changed his mind, saying he hoped to carry on after undergoing knee surgery.

Now Di’Anno tells The Metal Voice: “I spoke to the wife and she said, ‘Oh, my God – if you stay home for two months I’ll probably murder you.’ So I decided in the end, ‘Fuck it.’”

He explains: “I was going to retire because of a bad knee, and it was really pissing me off. I thought about quitting – not because I wanted to, but I thought, ‘This could get worse; I’m doing more damage to it.’ Then I thought, ‘It doesn’t make a difference. It’s about the voice.’”

As a result of successful surgery, he says of his current live schedule: “It’s not a farewell tour.”

He’s working on an album with his latest outfit Architect Of Chaoz, which includes members of his German touring band the Phantomz. He reports: “Doing all these things is great – but I actually want to be part of a band.”

Di’Anno’s DVD The Beast Arises will be released on October 6, including a selection of Maiden tracks.