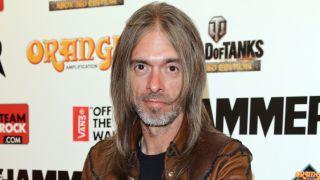 Rex Brown says every band “wants to be a Pantera.”

And the former Pantera bassist he says the impact he, guitarist Dimebag Darrell, drummer Vinnie Paul and frontman Phil Anselmo had only happens once in a lifetime.

He tells Songfacts: “Every band out there wants to be a Pantera. I’m not patting myself on the back when I say that, it’s just fact. They’re trying to get the riffs and they’ll never have it. They’ll never get it. It takes the four of us. You can’t just throw three of the original guys out of Slayer and expect to sound like Slayer, it’s just not going to work.

“Just one of those things. You run across that once in a lifetime and you just fight for it, and that’s what we did with the band.”

The Kill Devil Hill bassist, who reflects on the death of Dimebag in the latest issue of Metal Hammer, also reveals Pantera found it difficult finishing the writing and recording process as they wanted everything to be perfect before laying down material.

He continues: “We were such perfectionists in what we did. Really a lot of the time the thought process was thrown through the door, and it just came out naturally – it didn’t feel contrived. That was the beauty of it.

“Once we started really having to think about what we were doing, which was probably towards the end with Reinventing The Steel, we were trying to take something from each record and make it into who we are.

He adds: “Our whole plan was to take a break and then reconvene, and it just didn’t turn out that way. But I’m sure if Dime was still around we would still be doing whatever we’d be doing. But as it turns out, he’s no longer with us, which kind of sucks. We got robbed by some fuckin’ lunatic. It is what it is, and it’s a hell of a ride.”

Last month, TeamRock Radio recorded a one-hour tribute to Dimebag to mark the 10th anniversary of his death. It’s available to hear on demand.

*This story was updated on January 8 to add the word ‘a’ to Rex Brown’s quote ‘Every band out there wants to be a Pantera.’