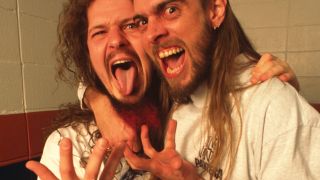 First, a pause. Then, an exhalation of breath. Rex Brown is mulling over the difficult question that has just been put to him. As we ask the former Pantera bassist to pick one memory that stands out from his many years with his former bandmate, we are left in no doubt as to the esteem, the love, the gratitude and the painful, aching loss that Rex Brown felt when Dime was taken from us. Or rather feels – still feels, to this very day.

“There can’t be just one,” he finally says. “Listen, if we’re going to do this lets do it right; I have to point to the overall picture of the man. The guy you saw up on that stage with a guitar in his hand and my friend that you would see me with offstage are one and the same. There are just so many occasions that he was just so gracious that picking one incident and thinking that it could top all of the others is just too tough a call.”

Rex, of course, was one half of metal’s most ferocious rhythm section. Teaming his rumbling, volcano-heavy bass with Vinnie Paul’s thunderclap drumming gave Dime the platform and licence to perform such stunning guitar work.

“I just think Dime was the one that held us together,” Rex states, matter-of-factly. “Looking back on it now, he was the one that was our driving force. At the start of the band we were just building and bonding, and over time he revealed himself to be this magician. It inspired us and drove us on to know we had something so special, because Dime just made us so tight. You think how tight we were in the studio, we had to be even tighter in the live act. We were dynamite tight.”

It’s no secret that Dime was an incredible musician, but Rex believes that his influence on the success of Pantera stretches way beyond the boundaries of mere music. “I can’t describe it as any other way than a brotherhood,” he says. “Me and Dime would always share a hotel room. Always me and Dime in the same room… and shenanigans! Dime would always be playing a prank or getting something on somebody. Or somebody would be pulling something on him. Just really funny shit. And that helped us get through the hard times. Because it was such a great release when the music was so super-serious. You know we didn’t always say it all the time, but we knew it; the determination, the music, the togetherness.”

It was a brotherhood that extended beyond the four members of Pantera and their crew. One thing that made Dime so revered was his down-to-earth nature and ability to include every single fan attending the show. “Obviously, he was the guy you wanted to hang out, have a beer and jam on the guitar with,” remembers Rex. “And for him it would be a letdown if he didn’t meet that last fan. He was always the first one out there for the fans. And he didn’t wanna talk about it, it was just something he did, he never wanted a pat on the back. He went to every length to make sure the fans were taken care of. The guy that came in at the back of the line, he probably got the best slot. Dime would take him on the bus, because he’d been waiting so long, and get him fucked up. That was Dime’s way of entertaining people; get them drunk and let them entertain him. No one was gonna drink Dime under the table! I’d wake up at 10 in the morning and, sure enough, the stereo is on and Dime is there. We had a show in eight hours so I had to make him get some sleep, then we’d do it all again.”

Again, you can hear the pride in Rex’s voice as he remembers his friend. You can sense he feels privileged to have been able to share so many years with such a giant of a man. “Oh, there will never be another one like that,” he sighs. “It’s hard to explain. He just had so much energy. More energy than I’ve ever known of anyone in my life. He would just keep going and going and going – he was non-stop. That’s what kept us going when we were on these long, never-ending tours. If he was around today then I think he’d still be the same, because you could not suppress the drive of the man… but I guess we’ll never know.”

This is where the hurt and confusion comes flooding into Rex’s voice. Clearly, the wounds of losing such a man, both as a friend and as the musical force of nature that he was, will never fully heal.

“I just think we’d still be making a lot of great music,” he manages to explain, “but I can’t think like that. Some days I just think, ‘God damn, I miss him.’ There’s not a single day that goes by when I don’t think about him. We were very close and I always try and keep a little bit of him with me.”

It would seem that, as far as Rex is concerned, the man and the myth are very much one and the same.