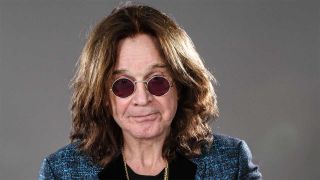 Speaking exclusively to Hammer at the ceremony, Ozzy revealed how he tried to see the singer at his apartment on the day he died in December 2015.

"I miss having him around, he was a good guy, Lemmy Kilmister,” said Ozzy. “I phoned him on the day he died. I knew he was dying. He didn't even know it was me. I had to say to him: ‘It's Ozzy, Lem.’ He just gurgled down the phone to me. I said ‘Lemmy, for fuck sake, stay there, I'm coming.'

“I said to Sharon: ‘Fuck it, get in the car, we're going around to his apartment.' And just as we were leaving she came up to me and said: ‘Don't worry, he's gone.’ And I went 'Oh god…’ I just sunk. It hit me really hard, I'm not going to pretend it didn't.”

“His memorial was something else as well,” said Ozzy. “I thought to myself, ‘Jesus, if he was looking down at this shower!’ There was a tray of drinks as you went into the church. I thought 'This is Lemmy alright!'

“All of the original members of that band are gone now, Eddie went earlier in the year and Phil went a few years back as well.

“They opened for me on my first American tour, that's a memory I'll take to my grave you know. Good times, they were all good guys, I miss them all to be honest.“

“You have to look at it and wonder how you've managed to stay here this long. We've lost some good ones, you know."

Ozzy, who is currently on his farewell tour, admitted he found it difficult to sing some of his classic songs.

“I’ve got to the point where I struggle to hit the notes on that, ‘The line in the window is a crack in the sky' line in No More Tears. My vocal coach told me, ‘Let the mic do the work.’ I don't wanna blow my voice out. I'm not a singer like Lemmy. Lemmy was a hell of a singer man, he was something else.”