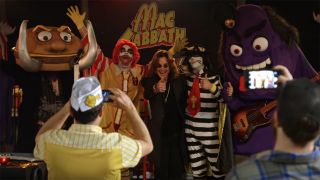 Ozzy Osbourne came face-to-face with fast-food themed Black Sabbath parody band Mac Sabbath for the first time recently – and the moment has been captured in a new video.

The surprise meeting was organised by his son Jack, with the clip showing The Prince Of Darkness driven to a studio where the sight of a horned beef burger named Slayer MacCheeze playing guitar to an alternative version of Iron Man awaits.

While the performance takes place, frontman Ronald Osbourne cooks up a couple of treats on the grill – including a bat in honour of the legendary moment when Ozzy bit the head off a bat onstage in Des Moines in 1982.

Luckily, Ozzy sees the funny side, later telling Jack: “It’s fun – it’s a spoof on Black Sabbath and if you can’t stand the laugh, don’t fucking do it! They did a good job.”

The clip was filmed for the History Channel series Ozzy & Jack’s World Detour, but didn’t make the final cut. Watch the video below.

Ozzy is gearing up for a special Ozzfest at The Forum in Los Angeles on December 31 and will return to the UK and Ireland early next year.