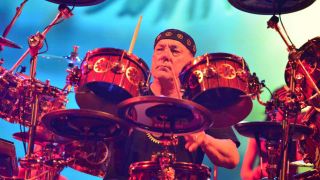 A tribute gig in honour of Rush drummer Neil Peart is set to take place in May.

Peart, who died on January 7 after succumbing to brain cancer, is the subject of A Night For Neil, to be held in his hometown of St Catherines, Ontario on May 16.

The event, which is being organised in conjunction with Peart’s family, is set to feature an array of performers and speakers to pay tribute to the drummer.

Proceeds from the event will go to the charities Overtime Angels, the St Catherines Hospital and Walker Cancer Center, the Juravinski Hospital & Cancer Centre in Hamilton, Ontario and The Royal Victoria Regional Health Centre in Barrie, Ontario.

“We are especially pleased to be able to support this charity event that will benefit some much-needed organizations that are close to our hearts,” said the drummer’s parents, Glen and Betty Peart

Tickets for A Night For Neil go onsale on Friday, February 28.

News of Peart’s death at the age of 67 was confirmed by his Rush bandmates Geddy Lee and Alex Lifeson, who said: "It is with broken hearts and the deepest sadness that we must share the terrible news that on Tuesday our friend, soul brother and band mate of over 45 years, Neil, has lost his incredibly brave three and a half year battle with brain cancer (Glioblastoma)."

Foo Fighters leader Dave Grohl called Peart “a kind, thoughtful, brilliant man” in a statement which reads: “Today, the world lost a true giant in the history of rock and roll. An inspiration to millions with an unmistakable sound who spawned generations of musicians – like myself – to pick up two sticks and chase a dream.

A fan-led petition to have a statue or plaque dedicated to Peart placed at Lakeside Park in St. Catharines, Canada, has gathered more than 20,000 signatures. The location was made famous thanks to Rush’s classic Caress Of Steel track in 1975 – and according to St. Catharines newspaper The Standard, Peart’s family are “fully on board” with the idea.