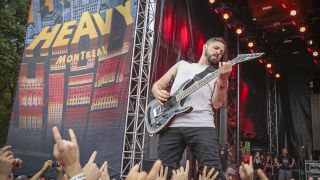 Montreal has been officially tagged a “heavy metal city.”

It comes after city councillor Craig Sauvé successfully pushed through a bill to recognise the Canadian city’s contribution to metal thanks to it’s vibrant music scene and events such as Heavy Montreal.

Global News report that Sauvé brought CDs by the bands Cryptopsy, Necrotic Mutation and Despised Icon to a council meeting in the city yesterday to plead his case.

And even local opposition parties backed the declaration, with Benoit Langevin telling the news network: “There’s no fight to have about the fact that heavy metal is part of us.”

Montreal’s Jimmy Kaye, who hosts The Metal Voice adds: “Everybody knows that Montreal is an international music city, but by declaring it we are getting national and international press.”

And Megadeth’s David Ellefson, speaking with Kaye, is a fan of the move, saying: “I think it’s awesome and there’s no city more deserving.”

"I've been lucky enough to spend time in Montreal on a number of occasions and I can confirm that not only is it a wonderful city, but it is indeed metal as fuck," he says.

"From amazing events like Heavy Montreal to the many great metal bars dotted across town – shout-out Foufs, it's a city where metal culture thrives, and I'm delighted to see that now officially recognised. Montreal is metal!"

However, one person who isn’t a fan is Sauvé’s mother. “She never understood my love for extreme loud music,” he says. “My mom is not a fan.”