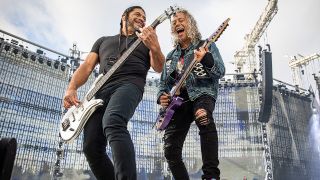 Metallica’s Robert Trujillo has spoken about how he and Kirk Hammett came up with their famous live ‘doodles’.

The bassist and guitarist play mini-jams every night on their WorldWired tour – songs which are closely associated with each city they play in.

The idea started in 2017, with Trujillo talking about them earlier this month on Drinks With Johnny – a video series hosted by Avenged Sevenfold bassist Johnny Christ.

Asked how the ‘doodles’ started, Trujillo says: “There was a duet moment where we were supposed to play a Metallica song, maybe like a deep cut, so we'd play I Disappear or something.

“We started noticing we weren't getting the result we wanted. We would go up there and start playing Eye Of The Beholder or something and then the crowd's expecting James Hetfield to come out and sing.

“They were feeling like it was a prelude moment and I started thinking, 'We've got to do something different.' So Kirk came out one night and he started playing Le Freak by CHIC and it totally caught me off guard. He got me the first night, because I didn't exactly know the bass line, so I improvised it. And then the second night, I got it."

Trujillo adds: "Then we got to Europe and we were in Amsterdam, and one of our management team members suggested, ‘Why don't you play Golden Earring’s Radar Love?’ So I started played the bass line, and then the crowd started singing, and it was like, 'Hold on a minute. There's something here.' Then we started to formulate some local bands from each city.”

Trujillo says that when Metallica returned to the US, he began to do his research, and adds: “I researched every single city and I found out what cool punk, alternative, country – it didn't matter the style – they had, and I learned the language, and I did the phonetics with the lyric, and we went out and did full arrangements. If there was an accordion solo, Kirk was playing it!

“So we did our homework, and we really went into it. I was going to Kirk's house in Hawaii to work with him on the arrangements. I spent five days there strictly on the songs. So we put a lot of hard work in it.”

To see and hear every ‘doodle’ that Trujillo and Hammett have played so far – check out our interactive Metallica Doodle Map.

Metallica will broadcast the latest instalment in their Metallica Mondays series later tonight on YouTube and Facebook. The stream will begin at 8pm ET (1am BST), with fans able to donate cash live to Metallica’s All Within My Hands foundation during the stream.