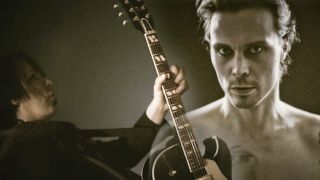 HIM’s Ville Valo has teamed up with Mark Gemini Thwaite for a special cover version of Abba’s smash hit Knowing Me Knowing you on Marks’ new album Volumes.

Abba’s world-beating hit Knowing Me Knowing You became part of the pop music lexicon way back in 1977, and now fellow Scandinavian Ville Valo has put his own spin on the classic.

Speaking about the cover, Mark Thwaite says, “The single sleeve and their video had a wintery feel to it, so when we decided to shoot a video for our version, both myself and Ville Valo agreed we should try and capture some of the feel of the Abba version and have a winter vibe to our video as well.

“We shot my footage up in the snow covered mountains and Ville’s close-ups in front of a fire place that is secret place in Helsinki We’re pleased with it and director Ville Jurrikkala did a fantastic job!”

Knowing Me Knowing You is taken from MGT’s new album Volumes, out in June via SPV/Oblivion.