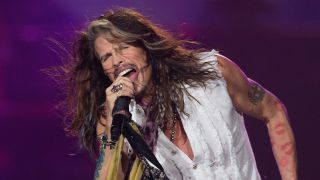 The Aerosmith frontman teamed up with Extreme guitarist Nuno Bettencourt to record the song for Muscle Shoals… Small Town, Big Sound, a tribute album to the legendary Muscle Shoals studio in Alabama, where the Stones’ recorded the original.

Tyler, who recently issued a cease and desist notice to US President Donald Trump telling him to stop playing Aerosmith songs, to describes the cover as “sick as fuck.” Speaking to podcast host Joe Rogan, he added: “We got all the players from way back then, the horn sections, got girls to sing it.”

Muscle Shoals… Small Town, Big Sound is released on September 26. As well as Tyler, it features appearances from Kid Rock, Grace Potter of Grace Potter And The Nocturnals, country stars Willie Nelson and Chris Stapleton and Alison Krauss among others.

Aerosmith recently announced an 18-date residency in Las Vegas in 2019. The ‘Dueces Are Wild’ show kicks off at the Park Theater at the MGM resort on April 16.