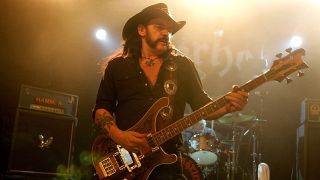 Lemmy began writing The Mask in 1979 and completed it with Kay in 2009, where it remained under wraps until now.

Lemmy's vocals on the track are a far cry from the style we’re used to, although it’s still unmistakably him, with the pair’s voices gently sweeping through the poignant ballad.

Kay says: “Big news! The first single on my new double album Black & Gold is a the long-lost duet I wrote and recorded with my dear friend Lemmy of Motorhead called The Mask. I'm so proud of this song, hope you enjoy it too.”

A selection of songs from the double album will feature on the Amazon Prime series Goliath, which stars Kay alongside Billy Bob Thornton.

Meanwhile, as previously reported, Motorhead’s 1979 albums Overkill and Bomber will be reissued on October 25 through BMG on 2CD and 3LP.