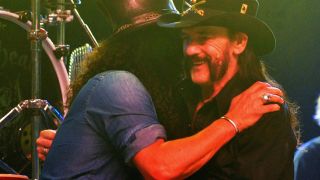 Slash was a regular visitor at Lemmy's house as he recovered from his recent health problems, the Motorhead man has revealed.

As he prepares to play with Motorhead at Hyde Park this week, Lemmy says Slash turned up at his Los Angeles home as he worked back to health following surgery to implant a heart defibrillator.

Slash had his own heart problems following his lifestyle while in Guns ‘N’ Roses.

Lemmy tells Rolling Stone: “He was at my house more than he’s ever been before, encouraging me. He’s a really fucking good guy.”

Now off the cigarettes and drinking less than before, Lemmy is raring to go at Hyde Park, where Motorhead play on Friday on the same bill as Black Sabbath, Soundgarden and Faith No More.

And he recalls seeing The Rolling Stones at the London park in 1968 – with Mick Jagger donning a dress. Lemmy adds: “I went to go see The Rolling Stones in the park and they were awful, completely out of tune. Jagger wore a frock.”