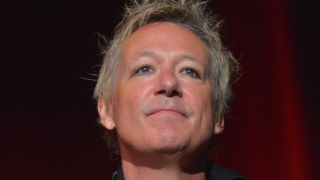 Scorpions drummer James Kottak admits alcoholism was behind his arrest and imprisonment in Dubai and has vowed to kick the habit.

However, there is still no indication as to whether he will continue to work with the band or whether they will replace him permanently.

In April, 51-year-old Kottak was arrested in the United Arab Emirates and charged with drinking without a licence, cursing Muslims, making indecent gestures and removing his pants. He was jailed for a month and fined around £320.

Swedish drummer Johan Franzon filled in for Kottak during a series of gigs in Scorpions’ home country of Germany in the wake of the incident.

Having served his sentence and arrived home in the US, Kottak has spoken out about the incident. He says: “After years of drinking alcohol, on April 3, 2014, my addiction finally caught up with me during a five-hour flight from Ekaterinburg, Russia to Bahrain via Dubai, during which I consumed five or six glasses of wine.

“One of the police officers recognised me as the drummer of The Scorpions. When the police asked me to show my ID, I showed them the ‘Rock & Roll Forever’ tattoo on my back, instead of my actual ID, which was in my back pack my friend was carrying for me. Apparently, the police did not find this funny and I was charged with drinking without a licence.”

Kottak says he immediately sought help with his addiction when he got home and says he’s committed to changing his lifestyle.

He adds: “I am determined to come to grips with my alcoholism and am doing everything on a daily basis to beat this relentless disease. This entire incident caused me to realise that it is time to stop drinking once and for all so that I can become the father, musician, and friend that I know I can be.”

Soon after his arrest, Scorpions released a statement in which they urged the drummer to sort himself out. Neither party has made it clear what, if any, Kottak has with the band.