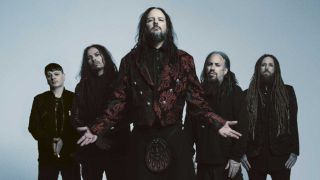 Korn’s Jonathan Davis has revealed that making the new Korn album, The Nothing, helped with “reflecting and healing” following the death of his estranged wife, Deven, from an accidental drug overdose in August 2018.

Speaking to Kerrang!, the singer said: “It’s basically me dealing with all the stuff that happened to me last year. Very emotional for me, but it is what it is.

“I really spent a long time on doing what I wanted to do this time,” he continued. “No producers came in. And people trying to get me to do one thing this way or the other way — everybody was overthinking a lot of things — but I finally was fed up with it and kicked everyone out and said, 'It'll be done when it's done.’

“And I locked myself up in my studio and spent a long time reflecting and just healing and making my art. And a couple of months later, I came out and it's done."

Davis went on to say that working on The Nothing in the wake of what happened wasn”t easy.

“It was really hard, but that’s how I've always dealt with all my problems — just throwing my heart and soul into my art.”

The Nothing is released on September 13 via Roadrunner/Elektra.