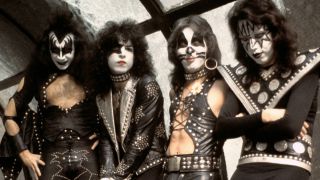 The original Kiss Krew have launched a book which promises to lift the lid on what life on the road was like with the band in the 70s.

The 352-page publication titled Out On The Streets: The True Tales Of Life On The Road With The Hottest Band In The Land – Kiss was written by former road crew members Peter ‘Moose’ Oreckinto, JR Smalling and Rick Munroe and also features contributions from Mick Campise who died in 2013.

It charts the work of the road team between 1973- 1976 and promises to tell the “real story of the glory years of Kiss.”

They say on their website: “Featuring behind the scenes stories containing some very rare and unseen photos and other bonus material, you’ll get as close to the action as The Krew themselves.”

The book features their day-to-day activities, explanations of how they set up the band’s special effects and other behind-the-scenes stories, including “tales of the ladies, good girls and bad girls and certain liaisons that we experienced along the way.”

It’s currently available to purchase from the Kiss Krew website. Signed versions can also be ordered along with T-shirts, sweatshirts and hoodies.

Kiss recently wrapped up a mammoth US tour with Def Leppard and appeared at the annual Macy’s Thanksgiving Day Parade in New York last month – an event which was slammed by mainman Paul Stanley who claimed they had been “screwed over” by organisers.