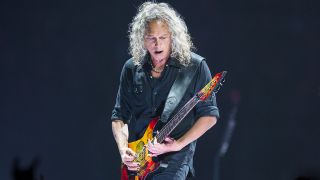 Kirk Hammett says that guitar solos will always be needed in Metallica.

His intricate fretwork was controversially dropped for the band’s 2003 album St. Anger – a move he objected to at the time. And looking back, Hammett exclusively tells Metal Hammer that it won’t happen again.

He says: “I guess it was appropriate for the time, but looking back, it doesn’t seem so appropriate to me now!

“I will always object to that, but I think the message was driven home after that album, that solos are needed in Metallica! People look forward to hearing them. So for me there was a weird vindication.”

Hammett has also pondered the future of the guitar in light of the troubles facing iconic brand Gibson, who filed for Chapter 11 bankruptcy protection in the US earlier this year.

He says: “I don’t know what the fuck it is, but people seem to be seeing the guitar in a different light and passing them up for fucking samplers and whatnot. Maybe it’s a sign of the times.

“Like all instruments, there’s a time when it goes out of fashion.

“In the early 80s, the guitar wasn’t as popular as it became again in the mid-80s, so we’ll see what happens as far as enthusiasm is concerned with the actual act of making music with a guitar.

“It’s sad news to me, but I hope Gibson prevail. They have in the past.”

Hammett is one of the cover stars in the new issue of Metal Hammer magazine, which is on sale now.

In addition, the new issue features a 15-track Revenge Of The Riff CD, the chance for you to win a Jackson guitar, the 50 best riffs of all time and much more.