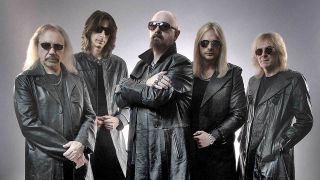 Judas Priest’s Rob Halford and Ian Hill have spoken about about a potential end to the band on the latest Metal Hammer Podcast.

As guests on the second edition of Metal Hammer Meets, the pair are asked if they’ve put any thought into the end of Judas Priest – following the demise of Black Sabbath last year, and Slayer announcing a farewell tour – plus the news of Glenn Tipton’s diagnosis with Parkinson’s.

“I cannot conceive of us ever saying, in 2022, at 3 o’clock, on a Wednesday afternoon, July, we’re gonna end,” said Rob Halford. “I think more than ever now, we’re so joyed and grateful that we’ve been able to get this far from the support of our fans that you don’t say a farewell tour, you don’t say retire. I think slowly but surely we’ll just play less and less and less, but I can’t see that for the foreseeable future.”

Ian joked about the band trying to retire following the Epitaph tour, before discussing the large number of tour offers the band receive, meaning it’s virtually impossible to ever stop.

“Where don’t you play? New album, tour coming up, all of these offers are coming from all over the world… so you’re right back into touring again.”

“You’ve got to go where your fans want you,” adds Rob. “You can arrange the touring in a different way, but you can’t just got to A, then to C, and miss B out, because those people have supported you for 30⁄40 years. You try to explain to them that you’re not coming to B so they have to travel a thousand miles to A or C. We can’t be that as a band, as people. So we’re just going to keep going and going and the end will come when it chooses to show its face.”

Download the Metal Hammer Meets Judas Priest podcast from iTunes now for the full-length interview where the band discuss new album Firepower, the struggles in the early days, working with Andy Sneap and much more.

In the new issue of Metal Hammer – in stores and available to order now – Rob Halford unites with Tony Iommi for the first time in a world-exclusive interview about the past, present and future of heavy metal.