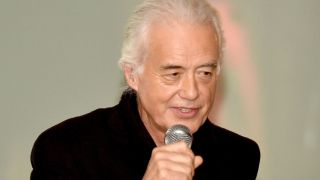 Jimmy Page has praised Royal Blood for taking the rock genre “up a few notches.”

The Led Zeppelin guitarist is a fan of the English two-piece and says he was blown away by their energy when he saw them perform in New York earlier this year.

Page tells the NME: “I went to hear them in New York. They were fantastic. Absolutely riveting. They’re such fine musicians. It’s music of tremendous quality.

“However long the set was, I could have heard twice as much. Their album has taken the genre up a serious few notches. It’s so refreshing to hear, because they play with the spirit of the things that have preceded them, but you can hear they’re going to take rock into a new realm – if they’re not already doing that.”