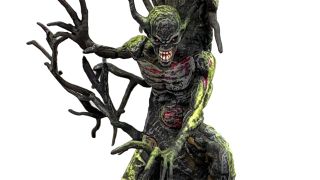 Eddie in his Fear Of The Dark tree sprite guise

Iron Maiden have revealed that they’ll release a pair of collectible Eddie figures later this year.

The limited edition figures are based on the band’s Legacy Of The Beast game, with the first inspired by the album art of Maiden’s 1992 album Fear Of The Dark featuring mascot Eddie in his tree sprite guise and standing at 6-inches tall.

The second figure displays Cyborg Eddie as first seen on the cover of Iron Maiden’s 1986 album Somewhere In Time, with the 4-inch tall model coming with “a dystopian world base, and packaged in a diorama style window box.”

Both figures will be released on Halloween and are available to pre-order from the Iron Maiden website.

Iron Maiden are currently on the North American leg of their Legacy Of The Beast tour, with the next show taking place on August 22 at the Chicago Hollywood Casino Amphitheatre.

Maiden will also play shows in South America in October.