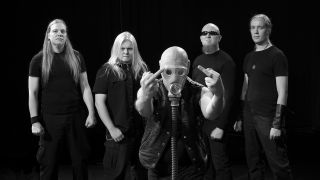 Doom Over London – the newly expanded three-day fest of all that is heavy and heart-rending that takes over Tufnell Park’s The Dome and Boston Music Rooms from March 25-27, 2016 – has a raft of new announcements to raise the spirits of all fans of extreme metal, and Metal Hammer can exclusively announce that Finland’s Impaled Nazarene will be joining Norway’s avant luminaries In The Woods… and Portuguese gothic gods Moonspell as festival headliners.

Although Impaled Nazarene’s punk-fuelled black metal rampage isn’t exactly from the doom metal playbook, the band’s inclusion is indicative of a wide-ranging lineup that gathers artists from across the extreme music spectrum.

Still based in Tufnell Park, Doom Over London has now added the Aces & Eights venue to The Dome and Boston Music Rooms, with a new pre-show on March 25 and the main event taking place on March 26-27, 2016.

With more bands to be announced, Doom Over London VI looks set to be one of the UK’s most immense festivals of the year. A small number of Early Bird tickets are available now for a mere £37.50 plus booking fee so head here for tickets, and check out the Doom Over London Facebook page here!