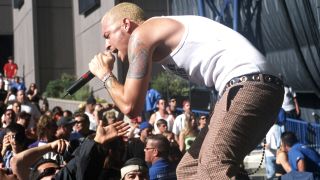 Linkin Park vocalist Mike Shinoda has revealed how he managed to win over Ozzfest crowds in 2001.

Speaking to Noisey about Slayer's iconic Reign In Blood album, Mike says it was the genre-defining Raining Blood that turned the tide in the favour of Linkin Park on their first Ozzfest tour.

"We were on the bill with Crazy Town and Papa Roach who, Sharon Osbourne admitted in an interview before the tour even started that she put all those bands on the bill, including us, for girls. That was her statement, not mine. And we were like, ‘what the fuck Sharon? You screwed us!’ We started the tour the first week and we played immediately after Crazy Town.

"So the fans were booing unforgivably before we even got to the stage. So the beginning of our set was a like an understated electronic intro with Massive Attack. We thought that this would let the Ozzfest fans know that we weren’t Crazy Town. But the metal fans didn’t know the difference between Massive Attack and Crazy Town so they were booing from the start. We had a 40 minute set and it took most of it to win the fans back.

"The next week, we were in Philly and our DJ Joe Hahn found this album in a record store and said, ‘Instead of our intro, I’m going to play Raining Blood at the beginning of our set.’ We thought that it couldn’t be any worse than what we’ve been dealing with. Why the fuck not? He played the first 60 seconds of that song and the crowd was booing before but when it started happening they went apeshit and cheered the whole set. It changed the whole tour. All we needed to do was extend an olive branch and say, ‘We get you.'”