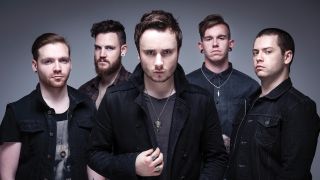 With shows as recent as last year and a second album in the works, it came as something of a surprise that Rise To Remain recently decided to call it a day. Not one to mess around, frontman Austin Dickinson wasted little time in revealing that he wasn’t going to be jacking in music just yet, with the announcement of his new band, As Lions.

“After all the lineup changes it didn’t seem right to keep breathing life into something that has changed so much in such a short space of time,” explains Austin. “Returning to music was almost an unconscious decision. Get back into it, start from scratch and do something new.”

The 24-year-old isn’t going to be abandoning plans of following in his father’s footsteps just yet, and although what was almost definitely a trump card in “my dad is cooler than yours” school-yard arguments, Austin’s famous heritage also hindered his previous outfit./o:p

“I take such a battering from people for being ‘Bruce’s kid’,” he says, “but I’ve always done this because I love it and I believe in the music.”

As Lions is giving Austin a clean slate, and with debut single The Fall, the band are starting as they mean to go on. With an anthemic chorus that also acts as a fierce message of intent, they state that they’re here to claim their own place in a thriving British metal scene. “UK rock is blossoming right now. It’s amazing and we’re going to be a part of it,” says Austin. “We’re focused on writing the best songs we possibly can. This is all or nothing.”

With a debut EP due in the spring, as well as a full-length album and live shows, 2015 is looking to be an exciting year for As Lions. With any missteps taken in the past behind him, Austin is in the best place he’s been in years and excited for what the year ahead will bring.

“I’ve not been this happy in a band for two years,” he proclaims. “We’re all such tight friends, and this feels like everything is exactly how it needs to be. Whether people listen or not, we’re doing it because we’re having so much fucking fun! This is us at our best. Get ready!”

THE FALL IS AVAILABLE FOR FREE DOWNLOAD BELOW OR VIA FACEBOOK.COM/ASLIONSBAND/o:p