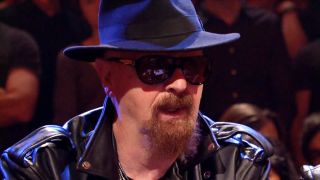 Judas Priest frontman Rob Halford has admitted he's desperate to record a blues album – because he wants to find out what his voice can do.

He believes the legacy of the music that built metal can still be heard in his performance, but he’d love the opportunity to visit those roots on record.

Halford tells Noisey: “When you give somebody a microphone and they sound louder than they really are, anything can happen.

“You change; I can’t explain it. When you start screaming into the microphone and you hear the voice coming out through the speakers, it’s absolutely thrilling. It gives you a sense of, ‘What can I try next? What can I do next?’”

He namechecks Janis Joplin and Robert Plant as examples of people who have taken a blues voice to new places.

“I like to think I’ve still got the blues in my voice,” he says. “I’d absolutely kill to do a blues record. It’s something I want to do because I want to explore what my voice can do in that wonderful world.”

Halford says blues music taught him abut “soaring, sweeping and screeching” and adds: “I also discovered I have a voice that can go in different directions. It’s a combination of a sense of adventure and just being inspired y those wonderful singers.”