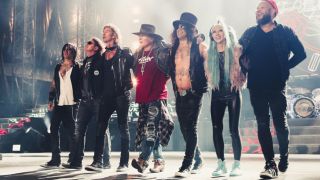 Billboard’s Top 50 Money Makers Of 2016 chart combined artists’ earnings through sales, streaming, publishing and touring – and they show that Guns N’ Roses’ reunited lineup featuring Axl Rose, Duff McKagan and Slash earned a total of $42.3 million in 2016 – a figure bolstered by the massive success of their Not In This Lifetime tour.

Bruce Springsteen was just behind Axl Rose and co, with The Boss earning $42.2m – with his live shows celebrating 35 years of The River bringing in the vast majority of cash.