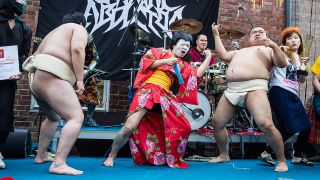 In April this year, we reported that the very first Knitting Heavy Metal World Championship would take place in Finland.

The competition has just concluded and saw 12 artists from around the world, who brought their knitting needles, wool and instruments to the city of Joensuu to put their reverse shaping, moss stitches and loops to the test, as they attempted to knit along to heavy rhythms.

While the USA’s 9-inch Needles finished third and Ellen from Denmark came second, it was Japanese craft masters Giga Body Metal who scooped the top prize for their purl-fect performance.

Explaining their decision, the judging panel said: “The performance had a story. The accessories and performance combined their own culture, knitting and heavy.

“The performers took the space and their audience in control. The performers were at the same time serious and crazy, just like it should be.”

The competition has proved so popular, that it will return next year. Keep your eye on the official website for further information.

PURL JAM – Knitters from around the world thrash around at the first-ever #HeavyMetalKnitting World Championship in eastern Finland. pic.twitter.com/LSFhjROO1r12 July 2019