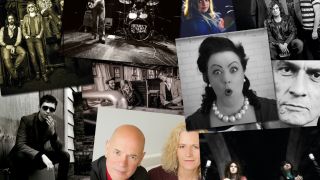 Our sister publication The Blues Magazine has been charged with the honour of finding the UK entrant for the fifth annual European Blues Challenge, to be hosted in Brussels on March 13 and 14, 2015. Organised by the European Blues Union, an organisation that does so much great work to promote the blues and its artists, labels and festivals, the Challenge is like the Eurovision Song Contest... but with infinitely better music.

With the input of their expert contributors and the magazine’s readers, The Blues Magazine have already assembled a list of ten nominees; all looking for your support to get them to Brussels, where they’ll face the cream of Europe’s blues musicians from European Blues Union member countries, including Germany, Spain, Norway, Italy and Belgium. Competition will be stiff, so we need to send a serious contender to keep the British end up.

Take a look at our ten nominees and then vote for the artist you’d like to send to Brussels to represent the UK.

The top three artists in this online vote will face each other in a British blues battle royal in front of a panel of judges. The victor of that competition will travel to Brussels for the Challenge. So, back your favourite, make your vote count and let’s bring the European Blues Challenge first-place trophy home!

Kaz Hawkins A churchy blues belter in the great tradition of Big Mama Thornton and Etta James, Belfast gypsy woman Kaz delivers one of the most powerful vocal performances we’ve heard all year on debut album Get Ready.

Red Butler As we said in the review of their debut album Freedom Bound, “Hook up an explosive guitarist with a powerful set of female lungs and it’s hard to go wrong. Sussex quartet Red Butler bring the tunes with convincing gravitas.”

Rosco Levee & The Southern Side Picking up the baton from Marriott, Clapton and Kossoff, Levee came of age on 2014’s Get It While You Can, a thrilling mix of sweaty juke-joint rockin’ and heavy psych organ blues.

Tony Devenport We featured Devenport’s sublime Gonna Find Me A Train (A Brother’s Tale) back in issue 12 of The Blues.It blew our socks off then and it still does now. A unique artist, the Battersea native has a soulful delivery that takes a lifetime to perfect.

Zoë Schwarz Blue Commotion Classically trained with a background in jazz (mentored by Keith and Julie Tippett no less), Zoë Schwarz is equally at home emoting the blues. Her work on new album Exposed reveals her impressive versatility and depth.

Vote for your favourite. The poll closes October 12.

Visit www.europeanbluesunion.com for more on the European Blues Union and the 2015 Challenge.