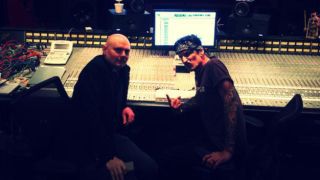 Smashing Pumpkins mainman Billy Corgan says working with Motley Crue's Tommy Lee has given him a new appreciation of the drummer's abilities.

And he’s said the only other man who could play like Lee is late Led Zeppelin icon John Bonham.

Corgan revealed last week he’d brought in the sticksman to play on Monuments To An Elegy, one of two Pumpkins albums under production.

Now he says: “I’ve had the fortune of being in the room with some of the all-time greats, and when you’re that close to someone who is the best at what they do, you gain insight into the way they are able to communicate to so many.

“Let’s call it a universal language – which music is, obviously. In applying it with heart and soul they present intangibles that give dimension and depth to a composition which otherwise would not be as kaleidoscopic.

“Tommy hits the drums in a crushing manner; but as many fans know, this is not without nuance or reaction. He has a fantastic ear for music and plays with the songs in a means that only enhances excitement. The only other place I’ve heard this phenomena is with John Bonham, where heavy drums can sound soft and expressive. Good company indeed!”

Corgan, who first met Lee in 1991 and shares his interest in exploring electronic music, says he’s delighted at the results of their studio collaboration. “Not only did we have a blast, but the nine songs sound epic in a way that is indescribable,” he reports.

“I guess I could toss off hyperbole after pronoun, but it would sell short what I like to call ‘Supersonic Pumpkins’ – which is a descriptor in itself.”

Both his albums are set to be complete by August.

Tentative Monuments To An Elegy tracklist:

Being Beige (World’s On Fire)