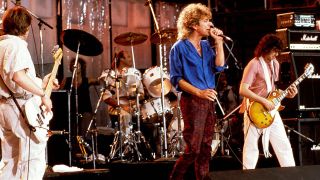 Phil Collins has described his 1985 appearance with Led Zeppelin at Live Aid a disaster – and says he would have walked off if he thought he’d have got away with it.

And he knew he’d made the wrong choice seconds after the charity performance began.

Guitarist Jimmy Page later called the show “pretty shambolic” after struggling with lack of rehearsal and technical issues. Frontman Robert Plant, who was suffering voice problems, said it had been “shambolic.”

Collins, who worked on Plant’s first two solo albums, tells Q: “I thought it was just going to be low-key and we’d all get together and have a play. But something happened between that conversation and the day – it became a Led Zeppelin reunion.

“I turned up and I was a square peg in a round hole. Robert was happy to see me, but Jimmy wasn’t.”

He admits to realising “this is a mistake” almost as soon as the band started playing. “You could sense I wasn’t welcome, and Tony was not making life easy,” he recalls. “If I could have walked off, I would have done. But then we’d all be talking about why Phil Collins walked off Live Aid – so I just stuck it out.

“It was a disaster, really. Robert wasn’t match-fit with his voice and Jimmy was out of it, dribbling. It wasn’t my fault it was crap.”

Collins will play a charity show in Miami in December, but he’s abandoned plans to stage a fully-fledged comeback, reporting that he’s “not ready” after a month of “exploratory rehearsals” with a band that included Jason Bonham. Led Zep are midway through their remaster release programme – and Page last week revealed that a fortune teller had predicted of the band’s success soon before they got together.