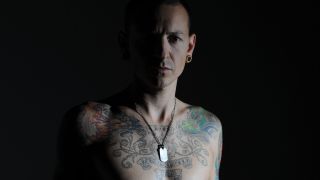 Chester Bennington’s original band Grey Daze have released a video for the track What’s In The Eye featuring the late singer.

It came to light last year that the Linkin Park frontman had been working on a new album with his band shortly before his death on July 20, 2017. They had been re-recording tracks first laid down in the mid-90s.

Now the first material from the new project has surfaced with the video for What’s In The Eye, which can be watched below.

Last month, the band, which features drummer Sean Dowdell, bassist Mace Beyers and guitarist Cristin Davis explained: “Over the years we’d become more knowledgeable, more experienced, and had more resources, so we decided to pick a selection of songs from our previously released albums and re-record them the way they deserved to have been treated back in the 90s when we initially wrote and released them.

“By February 2017 we started recording and in June, Chester and Sean announced the reunion, with a live performance planned for that Fall. Unfortunately, as we all know, that never happened.”

What’s In The Eye was originally recorded between 1993 and 1996 and was re-written by Grey Daze along with producers Chris Traynor, Kyle Hoffman and Jay Baumgardner.

The track used Bennington’s original vocals which he recorded at the age of 17.

The album will be released through Loma Vista later this year, with the company’s founder and President Tom Whalley saying: “As a teenager, when these recordings were done, he had this incredible raw and somewhat undeveloped voice that had an incredible tone.

“He had this ability to sing great rock melodies punctuated by that unmistakable guttural scream. Chester’s voice had a personality that made you a believer.

“Listening to the new versions of these tracks, I think it represents everything that the band members and the family told me that Chester wanted to achieve with re-recording this body of work.”