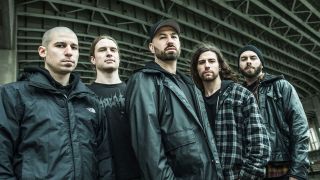 Like it or not, Artificial Intelligence is not longer a thing of the movies. We are living in a time where even our most sacred art can be mimicked by robots, meaning that even the most technical death metal can be easily replicated by a mere machine – all thanks to Berkley College of Music graduates Zack Zukowski and CJ Carr.

Their A.I. software, Dadabots, has a pretty impressive roster of artist skills under its belt. Previously, it has nailed generated music in the style of Aepoch and Meshuggah and Portuguese black metal band Cavemaster have even used neural net generated raw audio, trained on their own music, to make a new album.

But now it's turned its attention to Canadian technical metal monarchs, Archspire, and produced a continuous flow of non-stop metal in the form of a live stream on YouTube (see it below!).

The endless stream is based on Archspire's album Relentless, but the software has yet to master the art of writing lyrics (thank fuck for that, it could get rather scary!).

The band are aware of this robotic doppelgänger, and according to Metal Injection, have responded with a rather tongue in cheek statement, alluding to guitarist Tobi Morelli secretly being a robot too:

"We've been hearing about this 'AI that's trained on Archspire writing death metal' over the past few weeks. Well, here's the thing: We actually aren't surprised about this. We've been utilizing very similar technology to write our music this entire time. The program we've been using? It's called T.O.B.I. It stands for:

"Tobi has been part of our writing process since 2009, and while you may notice that he takes on a physical form as guitarist in the band, rest assured under those tight fitting clothes, he's more machine than man."

They further jokes via Twitter that the Terminator franchise A.I. and main antagonist, Skynet, will be writing their next album...