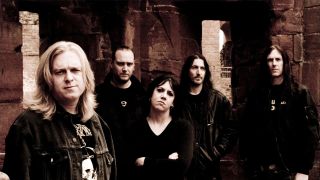 Headliners Bolt Thrower will be playing their only UK show of 2014 at the November event. And fellow Brits Raging Speedhorn will perform with their original vocalist Frank Regan for the first time in almost a decade, playing tracks from their first two albums.

Bolt Thrower vocalist Karl Willetts says: “Well, we always knew if we were ever ever going to play a festival in the UK, it would be Damnation. We’ve only heard good things about it from mates who’ve been, and other bands who’ve played it. So we’re chuffed our only UK show of 2014, and the foreseeable future, will be Damnation’s 10th anniversary bash.”

Other acts confirmed for the festival at Leeds University Union on Saturday, November 1 are Cannibal Corpse, Revocation, Anaal Nathrakh and St Vitus, with others to be announced.

Festival director Gavin McInally says: “Back in 2000, Raging Speedhorn’s Thumper derailed my nu-metal train, right into the path of Charger, Stampin’ Ground, Sikth, Earthtone9 and many other fantastic UK bands who were grossly underrated – which ultimately led to the creation of Damnation Festival.

“It wasn’t a coincidence that they were asked to headline our first event. To have them back all these years later, with Frank in tow, is pretty special. If scenes of complete devastation don’t accompany the likes of Knives & Faces, The Hate Song and Mandan, we’ll be sorely disappointed.”