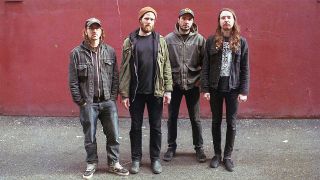 Baptists are premiering their new song Victim Service exclusively with Metal Hammer. The track is taken from the band's upcoming third album Beacon Of Faith, due for release May 25 on Southern Lord.

"From a songwriting standpoint, I think it is about as rock 'n' roll as we could get," guitarist Danny Marshall tells Metal Hammer. "I wanted to see if we could get away with doing a tune with this kind of mid-paced feel. The last riff in the song is a total John Reis-style riff attempt – his songs have always had a huge influence on the songwriting in this band, and to me that shines through more on this song than anything else on this record."

Beacon Of Faith is out May 25 and available to pre-order now.