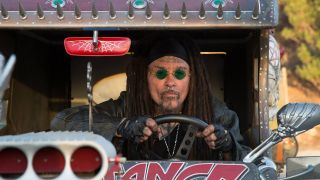 Al Jourgensen says he wouldn’t be who he is today without Ministry’s 1983 debut album, With Sympathy.

The Surgical Meth Machine frontman has slammed the synth-pop record on several occasions and previously referred to it as “an abortion of an album.”

But Jourgensen admits that he appreciates With Sympathy for paving the way for his music career.

He tells The Quietus: “It was revolting, disgusting and it traumatised me for years. I was sick to my stomach on a daily basis. I threw up more on that record – times ten – than any other.

“It was absolutely an abortion period of my life. I fucking hated myself, the world, and everything around me because of that record.

“I’ve finally come full circle. It still doesn’t mean I’m going to listen to that fucking drivel, but I am going to appreciate the overview, of what it’s done for me as a person in my career.

“I didn’t put it on this list, but I will give it an honourable ‘fuck you.’”

Jourgensen recently hinted he’d like to put out new Lard, Ministry and Revolting Cocks material if he can get people on board and will head out on the road with Ministry and DevilDriver across the UK in August.