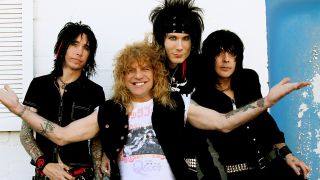 Adler’s self-titled solo band was derailed in 2013 following the launch of debut album Back From The Dead, when the leader fell off the wagon and began drinking again, forcing the cancellation of a US tour.

In November he celebrated 10 months sober, and said he’d wait until he’d reached the 12-month milestone before restarting his career.

“But his juices are flowing and that’s going to be great.”