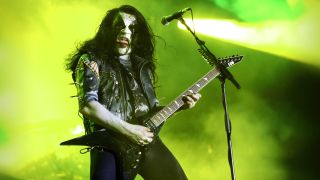 They’ll play their first show together at the Tuska Metal Festival in Finland in June, with four later dates announced – including a visit to the Forum, London, on September 18.

The band have signed to Season Of Mist for their debut album, expected early next year.

Abbath last month revealed via Metal Hammer that he’d abandoned Immortal after they were “unable to come to an agreement in order to move forward.”

He added: “The name of Immortal, for the time being, will rest; the essence, the power, the music – and Abbath – will not.”

“Abbath is one of a kind, a genuine character. I’ve known King for years… and Baard is a phenomenon.

“This lineup will surpass anything Abbath did in the past. The band has the chemistry, the ambition and the vision to excel.“

Tickets for the London show are available via a Metal Hammer pre-order using the password THERETURNOFABBATH.